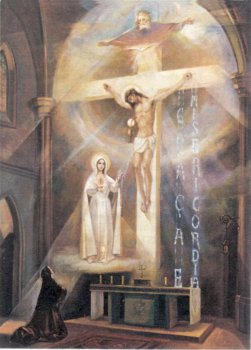 A VERY IMPORTANT and CRITICAL NOTE - November 8, 2013 In Lucia's biography published by the authorities of the Carmelite Convent in Coimbra (Portugal), and approved by the appropriate Episcopal authorities, it has been reported for the first time, that what Lucia revealed to the Ecclesiastical authorities and the Vatican made public on May 13th, 2000, as the Third Part of the Secret, was not its complete version. What Lucia revealed was the imagery without the accompanying explanation of what it meant. The explanation given by the Virgin Mary was, in essence, was the real Secret which Lucia took to the grave with her. You may access details about the above revelation through the first document below.


Most recent (and very important) documents

Attempts to counteract the importance and the Messages of Fatima

Other important documents about Fatima


Most recent (and very important) documents

*** What is Missing From the Revealed Secret of Fatima


As revealed through Lucia from her grave.


*** A Fresh Look at the Secret of Fatima, as it Was Revealed Decades Ago


Gaining a better understanding of the long ago revealed part of the Secret of Fatima.


*** The Period of Peace promised through Fatima has ended


The Period of Peace promised through Fatima has ended.


*** A comprehensive summary about Fatima events


A comprehensive summary about the Fatima events Published by The M+G+R Foundation Edited into a single document by Lee Penn [Note: Most documents indexed below have been summarized in this one document.]

Attempts to counteract the importance and the Messages of Fatima

*** "The Lady in Blue" - a Possible Final Blow to Marian Apparitions


This could be the final blow to Marian Apparitions... if the faithful are not well informed and warned.


A response to the latest Fatima distortions comes from an early publication describing the Fatima events.


*** Ratzinger on The Fatima Message


In the year 1996, Cardinal Ratzinger made a public statement about the Messages of Fátima. What he said was, at best, quite disturbing - because of the negative effect such statements would have on the Faithful.


Why did this well established and effective Marian Movement became a casualty in the competition for the promotion of Marian Messages?


*** The Fátima Conspiracy - Its Purpose


A discussion of the relationship between the distortion of the Fátima message and other global conspiracies.


Excerpts from "Bodas de Ouro de Fátima" (1917-1967) by Apio García. The question is: "Who guarded Lucia's manuscript about the Third Part of the Secret of Fatima? "


The text released by The Vatican about the Third Part of the Secret of Fatima.


*** The Third Part of the Secret of Fátima - Disinformation Campaign


A discussion of the plans to discredit the Fátima apparitions and the reasons why.


*** The Third Part of the Secret of Fátima - In Conclusion


An extensive and fully referenced discussion of the lies regarding the third part of the Secret of Fátima which the powers in control of The Vatican are trying to pass as truths.


Comments by The M+G+R Foundation about the Ignatius Press film "Finding Fatima".

*** The First Saturday Devotion to the Immaculate Heart of Mary


A discussion of the First Saturday Devotion in honor of the Immaculate Heart of Mary.


*** A Time Line of Religious and Secular Events Confirms...


How the Roman Catholic Church Administration Missed the Fatima Opportunity for World Peace.


*** Occultism and the rise of Nazi Germany


The key role played by occult practices in the rise of Nazi Germany.


*** The Marian Apparitions in Fatima and the Roman Catholic Church Administration


Benedict XV was the Pope during the Apparitions of Fátima in 1917.


*** In the end, my Immaculate Heart will triumph... the Holy Father will consecrate Russia to me, and she will be converted


A discussion pointing out that it is too late for the consecration of Russia to Her Immaculate Heart to prevent the upcoming chastisement.


*** Act of Entrustment to Mary Most Holy


The Entrustment Prayers Offered by His Holiness John Paul II on October 8, 2000 with commentaries by The M+G+R Foundation.


A discussion of the apparitions at Fátima, Portugal, the failure of the controlling Hierarchy of the Church to respond to the requests made and the consequences of this failure.


A discussion of the messages of Fátima, the lack of response and the consequences which have occurred and will continue to occur because of the failure to respond.


*** The Pruning of the Catholic Church


A letter to several members of the Roman Catholic Church Administration addressing the responsibility for the failure to respond to the Heavenly Messages, including those of Fatima.


Detailed chronology of key events related to the Apparitions of Our Lady of the Rosary of Fatima (1917) - as reported by Church Authorities and with historical annotations.


World Wars I and II - Key dates and their relation to Messages and Warnings from Heaven.


*** Balance Sheet of Communism as published by the Wall Street Journal


Balance Sheet of Communism as published by the Wall Street Journal.

Other important documents about Fatima

*** Fatima - Impressions of the Second Apparition


On July 13th, that Our Lady gave them the visions and secrets pertaining to the whole world, and to the events of the last hundred years. Our Lady also told them not to reveal parts of the secret until a later time.


A discussion of Pope John Paul II's homily in Fátima on May 13, 2000 and a discussion on how it confirms what the remaining part of the secret really was.


A translation of the text of Pope John Paul II's homily in Fátima on May 13, 2000 with comments by The M+G+R Foundation concerning the third part of the secret of Fátima.


Photocopies of original documents pertinent to the Apparitions of Our Lady of the Rosary of Fatima (1917) as reported by Church Authorities and others.

© Copyright 2000 - 2022 by The M+G+R Foundation. All rights reserved. However, you may freely reproduce and distribute this document as long as: (1) Appropriate credit is given as to its source; (2) No changes are made in the text without prior written consent; and (3) No charge is made for it.