Former Cardinal Ratzinger attempted to deflect the warnings of Fatima 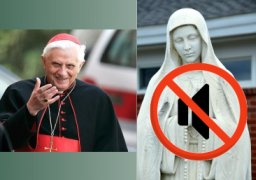 In 1996, Cardinal Ratzinger made a public statement about the Messages of Fátima which was very disturbing because of the negative effect it would have on the Faithful.

At that time, miguel de Portugal was moved to write to him about his statements, and also made copies of this letter available to possibly-interested parties within the Hierarchy and the worldwide Media.

The following summarizes (a) Ratzinger’s October 1996 comments downplaying the significance of the Fatima events, and (b) the April 1997 letter that Miguel de Portugal sent to Ratzinger (1), calling him (and the Vatican) to repentance.

Ratzinger’s attempt to deflect the warnings of Fátima

In 1996, during his tenure as Prefect of the Congregation of the Doctrine of the Faith (CDF), Cardinal Joseph Ratzinger offered his opinion of the Marian apparitions at Fátima, in order to deflect apocalyptic expectations surrounding the Apparition and the messages given by Our Lady.

On October 13, 1996, Ratzinger visited Fátima, and answered questions from Radio Renascensa, the most popular station in Portugal. (2) According to a report in "Echo of Mary", a newsletter that promotes the Medjugorje phenomena, the Cardinal told “all the curious people” that


«the Virgin does not create sensationalism, or fear, nor does She present apocalyptic visions. Instead, She guides men towards Her Son, and this is the essential.” If after 80 years the secret has still not been published it is because: “the Church wishes to oppose the expectation of unheard-of things so that Marian devotion remains sincere. Our Lady did not appear to the little shepherd children –unknown by the world– to create sensation, but to call the world back to the Sacraments.” The decision to reveal the secret “depends on the Pope, but let us not forget that the Pope is guided by the Holy Spirit...» (2)


According to the same "Echo of Mary" article,


«The Cardinal then visited Sr. Lucia, the 89 year-old visionary in the Carmelite convent of Coimbra, and confirmed that the third secret “does not regard something which we will have to one day face, but is a help to the faith.”» (2)


It is odd that Ratzinger felt the need to “confirm” the contents of the third secret with anyone, because this article, published in 1996 while John Paul II was Pope, indicated that Ratzinger was «one of the few people besides the Pope who knows the secret of Fátima». (2)

On January 30 1997, the Portuguese periodical "Visão" made a similar report on Ratzinger’s October 1996 visit to Fátima. (3) They said (in translation),


«Faced with the recent wave of expectation of apocalyptic events, the Vatican saw the need to send Cardinal Ratzinger last October to Fátima to announce that the secret no longer has any importance; that it does not exist any longer. “It does not pertain to the future of the world (...) The Virgin Mary does not want speculations about the future, nor does she want to scare anyone.”» (4)

The response by miguel de Portugal

miguel de Portugal responded to Ratzinger’s statements on April 16, 1997, with a letter to the Cardinal titled “The Intoxication of the Messages of Fátima and of Other Valid Marian Apparitions”. (5)

Thirteen years ago, he wrote this to Ratzinger:


“Cardinal Ratzinger, if you have not been misquoted by the press, you have lied. … Your alleged statements reach beyond Fátima. This compounds the problem. May we remind you that the Apparitions of La Salette also have the endorsement of the Church? Not only was the controlling hierarchy of the Church derelict in their responsibility regarding the timing of the implementation of the requests from Heaven, through Fátima, but now said events and requests are being rewritten as a way of covering up past failings and devastating future failings.”


“If the original Fátima revelations and events were a lie, The Vatican has endorsed, and continues to endorse, the biggest financial fraud in the history of the Church and should be prosecuted in an International Tribunal. If instead, they were not a lie, The Vatican is responsible for the death of over 100 million people as a result of not acting upon what God, through the Virgin Mary at Fátima, asked to do to prevent such holocaust.”


Miguel concluded with a warning to Ratzinger and his allies:


“Lying, denying, and ignoring is not the way to serve the Truth Incarnate – Jesus Christ. Confessing wrongdoing and seeking forgiveness is. miguel de Portugal, in the Name of God, have pleaded with and warned those who shamelessly control, for the satisfaction of their egocentric purposes, the Church founded by Our Lord Jesus Christ. There is still time to temper the level of suffering God will allow upon the Church and mankind by abandoning the erroneous path chosen by the Masters of the Vatican.”


The Vatican –and Ratzinger and his confederates– did not heed this warning. With the release of the falsified “Third Secret” in 2000, and with their continued efforts to manipulate the authentic messages from Heaven (as given at Fátima, Akita, and elsewhere), the controlling authorities of the Church have compounded their fraud, negligence, and other crimes against God and man.

(3) An image of the original article, in Portuguese, is available at: “Former Cardinal Ratzinger and the Message of Fátima”, Page 5 of 5

(4) Translation provided by: The M+G+R Foundation, “Former Cardinal Ratzinger and the Message of Fátima,” Page 3 of 5

© Copyright 2006 - 2022 by The M+G+R Foundation. All rights reserved. However, you may freely reproduce and distribute this document as long as: (1) Appropriate credit is given as to its source; (2) No changes are made in the text without prior written consent; and (3) No charge is made for it.

Index of Fatima Documents Published by The M+G+R Foundation

The Snare of One Universal Religion


Letters of admonishment to the Catholic Hierarchy