Clarifying the Role of the Successors of St. Peter, since... 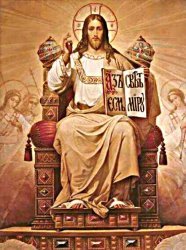 NOTE: Before digesting the contents of this brief document, we invite the new visitors reader to familiarize themselves with our full endorsement of the Catholic Faith. (1)

Jesus Christ clearly and unequivocally named Peter the Administrative Head, the Cephas, of the institution that would lead the Mystical Body of Christ, the Church, on Earth. This was confirmed by St. Paul through many of his writings (2). The true and only Head of the Mystical Body of Christ, the Church, is Jesus Christ and no one else. To deny this reality is to deny the Holy Scriptures. To deny the Word of God is to deny God and our Savior, Jesus Christ, the Word of God Incarnate.

The Roman Catholic Faithful has become very sensitive about the function and titles of the Bishop of Rome - the Pope. Of course, this has not been a random occurrence; this has been programmed by those who want to utilize the Papacy to further their own very worldly agendas.

This is quite similar with what the Vatican power seekers of centuries past did by producing a false document, the falsification Donation of Constantine (3). By means of said document the western world was made to believe that Emperor Constantine had willed the Roman Empire to the Successors of Peter.


ABOUT THE FOUNDATION STONE/ROCK OF THE CHURCH

Assuming that the following Scriptural reading...


...was not tampered with, then we must ask:

Who is then the "Rock" upon which the Church was founded?

This was clearly and unequivocally established by the Word of God as manifested in the Holy Scriptures.


The Rock / The Cornerstone


...and all drank the same spiritual drink, for they drank from a spiritual rock that followed them, and the rock was the Christ.


...as it is written: "Behold I am laying a stone in Zion that will make people stumble and a rock that will make them fall, and whoever believes in him shall not be put to shame."


...built upon the foundation of the apostles and prophets, with Jesus Christ himself as the corner stone.


At this point it is appropriate to point out that the same Biblical scene described in Matthew 16:16-18 is only mentioned in one other Gospel - that of Luke:


And he said to them: But whom do you say that I am? Simon Peter answering, said: The Christ of God. But he strictly charging them, commanded they should tell this to no man [Luke 9: 20-21]


In Luke's version there is no mention - directly or indirectly - about who or what was the Church going to rest upon.


2 And if unto others I be not an apostle, but yet to you I am. For you are the seal of my apostleship in the Lord. 3 My defence with them that do examine me is this. 4 Have not we power to eat and to drink? 5 Have we not power to carry about a woman, a sister, as well as the rest of the apostles, and the brethren of the Lord, and Cephas?


Then he brought him to Jesus. Jesus looked at him and said, "You are Simon the son of John; you will be called Kephas (or Cephas)."

"Kephas" and "Cephas" do not have the same meaning but their spelling has allowed much latitude for confusion or outright deceit. "Kephas" = stone/rock : "Cephas" = head

For example - In the Greek version of the New Testament (4) 1 Corinthians 9:5 the word "Cephas" is shown beginning with a Kappa, i.e. Κηφας

We also read that Cephas is a Syrian surname and that cephalo - head - is the form of Greek kephale "head," as in cephalopod.

We are not linguistic experts but being quite familiar with the manipulations of the Vatican to achieve their very worldly agenda, there is enough confusion about the roots of the words Cephas and Kephas that the deceit of transforming Simon into the fundamental Rock of the Church was a very easy procedure - notwithstanding all other quotations shown above which clearly indicate the the Rock is Jesus Christ - the Word of God Incarnate.


THE ROCK - In Conclusion

Since all of the above quoted Scriptural Words are copied and recopied, translated and retranslated as well as manipulated for centuries, the result is just what the man of iniquity needed to spring upon humanity the ultimate snare:

Through a carefully orchestrated "tradition", the Bishop of Rome, the Pope, has been made both, the Rock upon which the Church is founded as well as the Spiritual Head of the Church.

Why did the man of iniquity need this duality to be so? The answer is quite simple. The man of iniquity reasoned that if he can control and manipulate a man who is the Pope, a position whom many innocent faithful have been made to believe is occupied by a God-like man, he can lead many to perdition.

The glaring Biblical truth is that the Rock "upon which the Church is founded" is Christ Whom Simon had just recognized as such as we read above in Matthew 16: 16-18.

This is not only confirmed by the fact that upon a fallen man, even a Pope, a Divine Edifice like the Church, the Mystical Body of Christ, cannot be founded, but also by the above cited words to the Corinthians, Romans and Ephesians by Paul, as well as Peter's own statement.

We would have to ignore 2,000 years of error-plagued applied Christianity, and all the errors of many of the Popes since the beginning (5), to believe that God would set the foundations of His Church on such weak support - fallen man - any man.

In the rush to make Peter the foundation of the Church, it was ignored that Jesus Christ clearly and unequivocally named Peter the Administrative Head, the Cephas - not the Kephas, of the institution that would lead the Mystical Body of Christ, the Church, on Earth as Paul also confirmed.

The true and only Head of the Mystical Body of Christ, the Church, is Jesus Christ and no one else.

We shall close this section with the Words of the Master - Jesus Christ:


Those who fundament their faith upon what the Church Administrators say and not on the Holy Word of God (6) will, as the Church is purified (7), collapse just as a house that is built on sand.

To ensure that satan's plan would be as perfect as possible, man was enticed to define and proclaim the concept of Infallibility. No one checked that such claim did not even apply to St. Peter, as it is clearly illustrated in the letter of Paul to the Galatians:


When Peter came to Antioch, I opposed him to his face, because he was clearly in the wrong.... The other Jews joined him in his hypocrisy,... When I saw that they were not acting in line with the truth of the gospel, I said to Peter in front of them all, "You are a Jew, yet you live like a Gentile and not like a Jew. How is it, then, that you force Gentiles to follow Jewish customs?...[Galatians 2: 11-21]

This rejection of "blanket Papal infallibility" was confirmed on Dec. 7, 1965, when, a day before closing the Council, Paul VI and Athenagoras I made a joint declaration in which they mutually deplored and lifted the excommunication that were pronounced in 1054 and that gave rise to the schism between the Churches of the East and the West.

This rejection was later confirmed by no less than H.H. John Paul II himself during the Jubilee Year. During the course of this year, H.H. John Paul II repeatedly asked forgiveness from God for the past and present faults of the children of the Church. Many of those "faults", read: "sins", committed were either committed by or approved by the Pope of the particular era (3) in question.

It should then be clear, to even the most feeble minded individual, that an Infallible Pope would not make mistakes, yet they were many and very serious mistakes made over the last 2000 years starting with Peter as we have illustrated above.

Therefore, Papal Infallibility, in terms that the Pope is infallible in everything he does and/or say, falls in the same category of the already mentioned Donation of Constantine (3). A myth to consolidate the Temporal Power of the Pope - something that Jesus Christ Himself rejected from the beginning:


For an in depth evaluation of the claim of Infallibility visit our document addressing this issue at length. (8)

The Bishop of Rome, the Pope, was unquestionably named the Administrative Head, the Cephas, (Leader) of the institution that would lead the Mystical Body of Christ, the Church, in its journey through Time.

We realize that the above will cause much consternation among some Roman Catholics but, as we have said before, we do not exist to please people, but to please God [Paraphrasing Galatians 1:10]. What we write and say is only to be "seen" and "heard" by those who have "eyes to see" and "ears to hear" (9).

Once H.H. John Paul concluded his Pontificate, all that we have discussed in this document only has a historic value since John Paul II was the last legitimate Successor of Peter.

(1) Our position regarding, and endorsement of, the Catholic Faith

(5) All the Popes since the beginning

(6) The Only Foundation of the Faith

(7) The Gates of Hell Will Not Prevail.... But Some Conditions Do Apply...

(9) Who are the ones who have Eyes to See and Ears to Hear?

© Copyright 2002 - 2022 by The M+G+R Foundation. All rights reserved. However, you may freely reproduce and distribute this document as long as: (1) Appropriate credit is given as to its source; (2) No changes are made in the text without prior written consent; and (3) No charge is made for it.


The Roman Catholic Church and the Papacy, in Crisis - Canonization of Mr. Escriva

On the Forgery of the Alleged Donation of Constantine

The Papacy - A Historical Perspective

The Claim of Papal Infallibility - Who is like unto God?

The prophecy of the Popes attributed to St. Malachy

Francis, the Record of an Anti-Pope