Why Our Motto Is

In God we trust and everyone else must prove himself first The purpose of this document is to share certain dramatic events which occurred in Hiroshima that may help some see the importance of sincere prayer in order that Psalm 91 (2) becomes a reality in one's life.

We requested one of our frequent visitors to research the mostly ignored manifestation of the Divine protection for certain individuals in Hiroshima when the atomic bomb was dropped there by the allied forces. We do not need any proof to live what our motto above proclaims but others, who "do not know the face of miguel de Portugal", may need "a face" to believe it.

Following is the response of our frequent visitor who did the search.


Did anyone survive the atomic blasts at Hiroshima and Nagasaki unscathed? The short answer is yes. At least four German Jesuits sent as missionaries to the Japanese survived the Hiroshima blast even though they were only 1 kilometer from Ground Zero. Not only did they suffer only minor injuries, but they did not have radiation sickness, nor any other effects of radiation exposure. The main spokesperson for this group, Father Schiffer, apparently has been examined by over 200 doctors without good medical explanation. He has spoken of this event on behalf of the original Blue Army (3), and elsewhere. Apparently, a community called Marytown or The City of The Immaculata, located in Nagasaki was also unscathed by the atomic blast and it, along with all the Franciscan Friars inside, survived. This community was founded by Saint Maximillian Kolbe. However, the only extended document supporting the above facts is listed below. The story of the Jesuits is compelling. Whether or not it was because they lived the message of Fatima is open to speculation. As you would say, may the Holy Spirit guide the reader in his evaluation.

NOTE: Honoring the request of Drs. Rinehart and Hubbell we have reprinted below the entire document, therefore, The M+G+R Foundation is not responsible for typographical or any other kind of errors and/or inaccuracies - including dates and misquotations.

Rosary Miracle - Safe in the Midst of Nuclear Blast !!

by Dr. Stephen A. Rinehart and Dr. Richard F. Hubbell

Please distribute freely - but only in its entirety only - Thanks!!

God can and does miraculously protect those consecrated to Him - especially through the Rosary - even in the midst of a powerful nuclear detonation. Every effort at meticulous and verifiable accuracy - with as many direct sources as possible being quoted and URL's being provided - in the preparation of this article - which originally came about as a series of emails between the two authors.

There was a home eight blocks (about 1 kilometer) from where the A-Bomb went off in Hiroshima Japan. This home had a church attached to it which was completely destroyed, but the home survived, and so did the eight German Jesuit missionaries who prayed the rosary in that house faithfully every day. These men were missionaries to the Japanese people, they were non-military, but because Germany and Japan were allies during WWII they were permitted to live and minister within Japan during the war. Not only did they all survive with (at most) relatively minor injuries, but they all lived well past that awful day with no radiation sickness, no loss of hearing, or any other visible long term defects or maladies.

Naturally, they were interviewed numerous times (Fr. Schiffer, a survivor, said over 200 times) by scientists and health care people about their remarkable experience and they say "we believe that we survived because we were living the message of Fatima. We lived and prayed the rosary daily in that home." Of course the secular scientists are speechless and incredulous at this explanation - and they are sure there is some "real" explanation - but at the same time over 55 years later the scientists are still absolutely bamboozled when it comes to finding a plausible scenario to explain the missionary's unique escape from the hellish power of that bomb.

At 2:45 a.m. on August 6, 1945, a B-29 bomber took off from the island of Tinian to drop the first atomic bomb on Japan. At 8:15 a.m. the bomb exploded eight city blocks from the Jesuit Church of Our Lady's Assumption in Hiroshima. Half a million people were annihilated. However, the church and four Jesuit fathers stationed there survived: Fathers Hugo Lassalle, Kleinsorge, Cieslik and Schiffer. (RH note - all other accounts state clearly that there were eight Jesuits stationed in this home not four - and it is well known that all eight survived - the author of this present article apparently only had the names of four of them, for instance Fr. Arrupe is left out of the list - and at this writing, I have not been able to find the names of the other three Jesuits. end of note.) According to the experts they "ought to be dead," being within a one-mile radius of the explosion. Nine days later on August 15, Feast of Our Lady's Assumption, U.S. forces were ordered to cease fire.

This is the incredible story of the late Fr. Hubert Schiffer, as retold by Fr. Paul Ruge.

I met Fr. Schiffer in the late 70s at the Tri-City Airport in Saginaw, Michigan, as he was going to give a talk for the Blue Army Novena/Triduum. As I chauffeured him around he told me stories of his life, especially of the atomic explosion at Hiroshima. On the morning of August 6, 1945, he had just finished Mass, went into the rectory and sat down at the breakfast table, and had just sliced a grapefruit, and had just put his spoon into the grapefruit when there was a bright flash of light. His first thought was that it was an explosion in the harbor (this was a major port where the Japanese refueled their submarines.)

Then, in the words of Fr. Schiffer: "Suddenly, a terrific explosion filled the air with one bursting thunderstroke. An invisible force lifted me from the chair, hurled me through the air, shook me, battered me, whirled me 'round and 'round like a leaf in a gust of autumn wind." The next thing he remembered, he opened his eyes and he was laying on the ground. He looked around and there was NOTHING in any direction: the railroad station and buildings in all directions were leveled to the ground.

The only physical harm to himself was that he could feel a few pieces of glass in the back of his neck. As far as he could tell, there was nothing else physically wrong with himself. Many thousands were killed or maimed by the explosion. After the conquest of the Americans, their army doctors and scientists explained to him that his body would begin to deteriorate because of the radiation. Many of the Japanese people had blisters and sores from the radiation. To the doctors amazement, Fr. Schiffer's body contained no radiation or ill-effects from the bomb. Fr. Schiffer attributes this to devotion to the Blessed Mother, and his daily Fatima Rosary. He feels that he received a protective shield from the Blessed Mother which protected him from all radiation and ill-effects. (This coincides with the bombing of Nagasaki where St. Maximilian Kolbe had established a Franciscan Friary which was also unharmed because of special protection from the Blessed Mother, as the Brothers too prayed the daily Rosary and also had no effects from the bomb.) 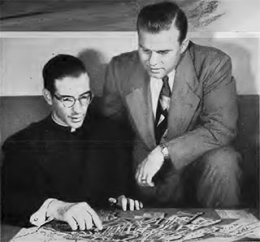 The above will undoubtedly rekindle the Faith in many while it will not impact those who do not Have eyes to See and Ears to Hear. (5)


NOTE: You may want to see the Booklet by Hubert F. Schiffer containing a more detailed (in first person) account

(5) Those who have Eyes to See and Ears to Hear

(7) Please note that a most publiziced photo that many are labeling as "the ruins of the Hiroshima Catholic Church after the atom bomb" is really Nagarekawa Methodist Church in Hiroshima. If there is any image of the ruins of the Jesuit Church of Our Lady's Assumption in Hiroshima after the bomb, we have not found it after an extended search.

© Format Copyright 2006 - 2021 by The M+G+R Foundation. All rights reserved. However, you may freely reproduce and distribute this document as long as: (1) Appropriate credit is given as to its source; (2) No changes are made in the text without prior written consent; and (3) No charge is made for it.

Were Kings Miracle Workers? - When the Great Kings Healed With Their Hands

The Blue Army of Fatima - What Went Wrong?