The controversial renovation of Cathedrals after Vatican Council II 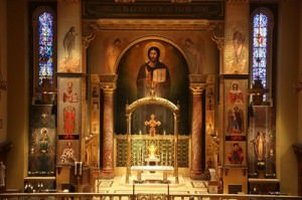 Wreckovation (1) is a portmanteau term coined by some Catholics to describe the controversial style of renovations which historic Catholic cathedrals, churches, and oratories have undergone since the Second Vatican Council (Vatican II). Some post Vatican II renovations of older churches are similar in nature to the iconoclastic modifications of churches that took place in Northern Europe during the Reformation in the 16th Century, or during the Byzantine Iconoclasm in the 7th Century.
DETAILS

"Woe to you scribes and Pharisees, hypocrites: because you devour the houses of widows, praying long prayers..." (Matt. 23: 14)

This verse, addressed in prophecy to the Vatican Administration, can have several meanings. These meanings include taking the money (and/or churches and their furnishings) donated by well intentioned poor, elderly, or widowed faithful, and squandering them, or utterly and intentionally destroying them ('devouring them...)  that the faith of many simple folk be destroyed.

Neither churches, nor their furnishings, nor their works of art, etc. are the object of Faith; that is God alone. Nor should the faithful be lulled into such virtual idolatry.

Aside from the convenience of a regular and permanent place to offer Mass, the ONLY reason to have a church building is for the reservation of the Blessed Sacrament, so that the faithful can be in the presence of God to pray. For the first three centuries of the Church's existence there was no such thing as a church building. Mass was said in private homes, in fields, caves, etc. If every church vanished tomorrow, that is exactly what would be done. The buildings, of themselves, are nice but unnecessary. All the Church has ever needed was the Holy Spirit.

The reality is that Catholic culture has built up an incredible array of treasure in art and architecture. For many Catholics this is helpful to their faith, as such beauty is evocative of God for them. Of itself this is not bad. However, this has also been a great aid to clerics who wished to pass off themselves and the church organization as "God". The buildings and art thus, by extension, came to represent God to the laity. Result: The induced skin-deep 'faith' of far too many Catholics.

While a doctoral thesis on the history and methodology of 'wreckovation' could easily be written, based on my vast professional experience with clergy, my observation boils down to this:


Opus Dei was well aware of the 'skin-deep faith' and what anchored it. For them to manifest the False Christ, they must first devastate Faith in most people. The 'liturgy wars' were a major thrust; the wreckovation agenda was ancillary. While some disoriented individuals may sincerely think that what they do thus is 'beautiful' (Lenin, Hitler, etc. did too), many more know exactly what they are doing. From observation, there has been much central planning of this - including precise agendas crafted for each parish. One will note that not all parishes were wreckovated, and not all to the same extent. Certain priests played 'good cop/bad cop': one destroys - his successor rebuilds. Yet both are members of the same club, taking orders from the same handlers. I have seen this with my own eyes.

The parishioner is given a simple choice to either:


b) Do as we say; be compliant.... no matter how insane, inconsistent or illogical.


This is an obedience test, complete with an integral Dialectic. You will be Liberal one moment, and then be Conservative. But you will be loyal to your ecclesial superiors (not God). This is mind control - being conditioned for acceptance of the False Christ.

In both cases the goal is for the subject to lose any real faith in God and/or to substitute a false 'faith'.

Perhaps this locution of Blessed Ann Catherine Emmerich (2) is worth another look, as it explains far more than just the artistic destruction:


"    *  "I saw St. Peter's. A great crowd of men was trying to pull it down whilst others constantly built it up again (3). Lines connected these men one with another and with others throughout the whole world. I was amazed at their perfect understanding.

* "The demolishers, mostly apostates and members of different sects, broke off whole pieces and worked according to rules and instructions. They wore WHITE APRONS bound with blue riband. In them were pockets and they had TROWELS stuck in their belts. (4) The costumes of the others were various.

* "There were among the demolishers distinguished men wearing uniforms and crosses (5). They did not work themselves but they marked out on the wall with a TROWEL where and how it should be torn down. To my horror, I saw among them Catholic Priests. Whenever the workmen did not know how to go on, they went to a certain one in their party. He had a large book which seemed to contain the whole plan of the building and the way to destroy it. They marked out exactly with a TROWEL the parts to be attacked, and they soon came down. They worked quietly and confidently, but slyly, furtively and warily. I saw the Pope praying, surrounded by false friends who often did the very opposite to what he had ordered... (6)"

EPILOGUE (by The M+G+R Foundation)

When the proof reader saw this document, he was immediately led to one of his books: Thomas Day, Where Have You Gone, Michelangelo: The Loss of Soul in Catholic Culture, Crossroad Publishing, 1994, p. 226.


In his books, Day laments the loss of traditional Catholic music, art, and architecture – but he is not a fanatic or a sedevacantist or an opponent of Vatican II.

At the very end of his book, Day told a story of a liturgical absurdity in a Lutheran church. He then asked,
[The bold in the quote below was added by the proofreader of this document.]


"What does it all mean?

First of all it means that Roman Catholics are not the only ones capable of liturgical nuttiness.

Secondly, it means prepare for the worst. We must surely be living in a dangerous era when any religion begins to treat human beings as if they were little kitsch toys – without yearnings, without imperfections, without imagination, without the gift of a soul, without art.

We would expect dictators, radical political theorists, and others who have a low opinion of people to indulge in amusing games with symbols, as a sign of their contempt for the idiots called human beings, but in religion this sort of thing is bad news. It means the end of that idea of a special, creating human 'soul,' and the beginning of an age when people in churches will be manipulated as if they were stupid machines - easily turned on or off (with a gimmick) by smart machines. It means head for the hills."


I first read this in the late 1990s, and never forgot it. It seems that this prophecy is being fulfilled, before our eyes.

We thank both the contributing author and the proof reader for their great contribution to our pages.

(3) The use of 'Liberal' and 'Conservative' elements in a Dialectic pattern or Strategy of Tension.

(4) This indicates members, associates, cooperators and collaborators of Ecclesiastical Masonry.

(6) This was the scenario of John Paul II and his OD linked inner circle.

© Copyright 2008 - 2022 by The M+G+R Foundation. All rights reserved. However, you may freely reproduce and distribute this document as long as: (1) Appropriate credit is given as to its source; (2) No changes are made in the text without prior written consent; and (3) No charge is made for it.

The Secrets of St. Patrick's Cathedral and its Masters