How Love Has Been Replaced by Fear

By the Christian "Evangelizers" 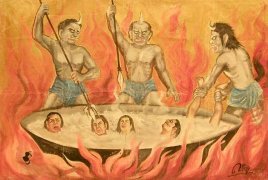 The primary purpose of this document is to Glorify God, Who holds responsible many Jews, Christians and Muslims for the miseries and calamities of the world. How often do we hear: "If God were..." or "Why does God allow this..." or "If there was a God..."

The true reason for the apparent lack of interest by God is that man simply turns a deaf ear to God and acts impulsed by its sinfulness and miseries, thus interfering with God Redemptive Plan for humanity... then, by default he shifts the blame to Him!

Following is a comprehensive and very real example of how a priest, needing to be Evangelized himself, takes a beautiful and descriptive parable given to us by Our Lord Jesus Christ [Luke 16: 19-31] – Who Was, Is and Will Ever Be Mercy Incarnate – and turns it into a tool of destruction; the destruction of the incipient Faith in a child.

Then we wonder what went wrong (0) with the Faith and, logically, with the world.

There is a Catholic book with terrifying and graphic descriptions of Hell (1) ... the details make it seem that the author knows the layout of the place as well as any demon.

Some key quotes from a terrifying book:


"In 1855, the following booklet was published for presentation to children at Catholic churches in Ireland and England. As you'll see, it had the support and approval of the Catholic Church, which saw nothing wrong with what it said or how it was presented."


The book title is "The Sight of Hell" (2) by Fr. John Furniss. The ecclesiastical approbation for the book follows:


"I have carefully read over this Little Volume for Children and have found nothing whatever in it contrary to the doctrines of Holy Faith; but, on the contrary, a great deal to charm, instruct, and edify our youthful classes, for whose benefit it has been written. —William Meagher, Vicar General, Dublin, December 14, 1855"

As an example, Furniss' description of one of the dungeons:

Look into this room. What a dreadful place it is! The roof is red hot; the floor is like a thick sheet of red hot iron. See, on the middle of that red hot floor stands a girl. She looks about sixteen years old. Her feet are bare, she has neither shoes nor stockings on her feet; her bare feet stand on the red hot burning floor. The door of this room has never been opened before since she first set her foot on the red hot floor. Now she sees that the door is opening. She rushes forward. She has gone down on her knees on the red hot floor. Listen, she speaks! She says;

"I have been standing with my feet on this red hot floor for years. Day and night my only standing place has been this red hot floor. Sleep never came on me for a moment, that I might forget this horrible burning floor. Look," she says, "at my burnt and bleeding feet. Let me go off this burning floor for one moment, only for one single, short moment. Oh, that in the endless eternity of years, I might forget the pain only for one single, short moment."

The devil answers her question: "Do you ask," he says, "for a moment, for one moment to forget your pain. No, not for one single moment during the never-ending eternity of years shall you ever leave this red hot floor!" "Is it so?" the girl asks with a sigh, that seems to break her heart; "then, at least, let somebody go to my little brothers and sisters, who are alive, and tell them not to do the bad things which I did, so they will never have to come and stand on the red hot floor."

The devil answers her again: "Your little brothers and sisters have the priests to tell them these things. If they will not listen to the priests, neither would they listen even if somebody should go to them from the dead."

Oh, that you could hear the horrible, the fearful scream of that girl when she saw the door shutting, never to be opened any more. The history of this girl is short. Her feet first led her into sin, so it is her feet which, most of all, are tormented. While yet a very little child, she began to go into bad company. The more she grew up, the more she went into bad company against the bidding of her parents. She used to walk around the streets at night, and do very wicked things. She died early. Her death was brought on by the bad life she led."

Regarding the eternal torment of a child:


"The Red Hot Oven" Ps. xx. "Thou shalt make him as an oven of fire in the time of thy anger." — You are going to see again the child about which you read in the Terrible Judgement, that it was condemned to hell. See! It is a pitiful sight. The little child is in this red hot oven. Hear how it screams to come out. See how it turns and twists itself about in the fire. It beats its head against the roof of the oven. It stamps its little feet on the floor of the oven. You can see on the face of this little child what you see on the faces of all in hell — despair, desperate and horrible! The same law which is for others is also for children. If children, knowingly and willingly, break God's commandments, they must also be punished like others. This child committed very bad mortal sins, knowing well the harm of what it was doing, and knowing that hell would be the punishment. God was very good to this child. Very likely God saw that this child would get worse and worse, and would never repent, and so it would have to be punished much more in hell. So God, in His mercy, called it out of the world in its early childhood."


"If you want to know the badness of mortal sin, put it into one scale, and pains of hell into another scale. You'll see that the balance stands equal. A mortal sin of one moment deserves the everlasting pains of hell."

The M+G+R Foundation Comments: If there is any sort of reading that would weaken anyone's faith, this is it. It makes God out to be a tyrant, one who keeps the Dachau Nazi Concentration Camp in operation... for eternity. This is literature (and preaching) that would make any child, or adult, for that matter, loathe God, not love Him.

The article links to the on-line Catholic Encyclopedia (the 1913 version) (3) , with a description of the author, Fr. Furniss:


“A well-known children's missioner, born near Sheffield, England, 19 June, 1809; [died] at Clapham, London, 16 September, 1865... He became a professed member of the Congregation of the Most Holy Redeemer (4) at St. Trond, Belgium, 1851, and afterwards gave missions in England and Ireland; but from 1851 until his death he devoted himself wholly to giving missions to children. He was the founder of children's missions and "the children's Mass", and by his writings systematized the philosophy of religious training. These missions lasted sometimes three weeks, and were given not only to school-children, but to working boys and girls. His maxim was that "nothing so disgusted children as monotony", and therefore he had the prayers at Mass (5) and the Rosary (6) sung to simple airs, and his sermons seldom lasted more than twenty minutes. He entered fully into the mode of thought of the child-mind, and, speaking quietly but with great dramatic power from a platform, he always riveted their attention. He was a wonderful story-teller, seldom moving to laughter but often to tears.”


The M+G+R Foundation Comments: Any normal child that heard Furniss preach in the same way that he wrote, should cry.

Another revealing quote from the Catholic Encyclopedia on Furniss:


“His writings were assailed as "infamous publications" by the rationalist (7) historian Lecky in his "History of European Morals", chiefly on account of the somewhat lurid eschatology (8) of the children's books. More than four millions of his booklets have been sold throughout English-speaking countries.”


The M+G+R Foundation Comments: If the "rationalists" attacked Furniss because of the "lurid eschatology" of his children's books, they were right. What delicate understatement, to describe Furniss' guided tour through Hell for the children as "lurid eschatology."

How would God teach the world about hell and move His children to assist Him in His redemptive work out of love and not fear?

It seems that God is always "one step ahead" with the answer...

On July 13, 1917, Our Lady of the Rosary at Fátima showed a vision of hell to the young shepherds, Lucía, Jacinta and Francisco...


“Terrified and as if to plead for succour, we looked up at Our Lady, who said to us, so kindly and so sadly:

"You have seen hell where the souls of poor sinners go. To save them, God wishes to establish in the world devotion to My Immaculate Heart. If what I say to you is done, many souls will be saved and there will be peace. The war (World War I) is going to end; but if people do not cease offending God, a worse one (World War II) will break out during the pontificate of Pius XI."” (9)

As we have said before elsewhere:


When we wish to search for any problem that assails us, the first thing we need to do is look into a mirror. If we are Blessed by God, we will see the No. 1 contributor to the problem reflected in that mirror.


The only problem with such procedure may be that, according to ancient lore, the image of blood sucking vampires is not reflected in a mirror... thus they cannot recognize themselves for what they really are.

Poor Furniss, maybe the heat of Purgatory – if he was that fortunate – will help him understand that if a child was easily influenced by evil individuals (11) , it was because such child did not have a shepherd to form its malleable soul properly.

May St. John Bosco dip his finger in water and touch poor Furniss's tongue with it – assuming that the abyss of separation between St. John Bosco and Furniss is not unsurmountable as it was between Lazarus and the rich Epaulon [Luke 16: 19-31].
May those who have "Ears, Hear" and "Eyes, See"

(0) What went wrong with the Faith

(1) John Furniss' The Sight of Hell

(4) Congregation of the Most Holy Redeemer

(9) Fátima in Lucia's Own Words; Specifically on Page 164

© Copyright 2004 - 2022 by The M+G+R Foundation. All rights reserved. However, you may freely reproduce and distribute this document as long as: (1) Appropriate credit is given as to its source; (2) No changes are made in the text without prior written consent; and (3) No charge is made for it.

The Future of Souls - Heaven or Hell? - What happen to the souls when the body dies