New Documents  Released Up To March 5th, 2005
[All updates may be accessed through the Links provided at the bottom of this page]

For a Novena to St. Michael the Archangel Click anywhere on the image. 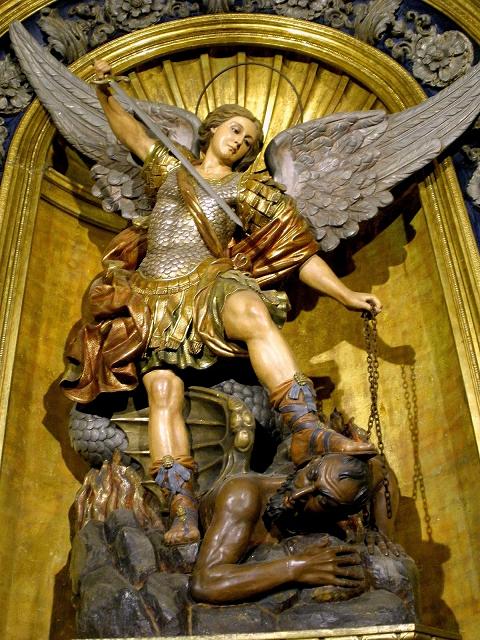 You Are Also Invited To Visit Our Research Department


To translate this text into any major language Click Here


The Future of the Domains of The M+G+R Foundation  Has Been Decided in Accordance to the Will of God.


In an effort to assist the Faithful who have nowhere to turn for consolation, we have tried to explain how  God interacts with us in our daily lives and how satan attempts to disrupt such interaction.


Due to a programming error  the Stations of the Cross were not showing up properly - instead, the image of Pontius Pilate washing his hands kept coming up repeatedly.


Posted On: Februray 23rd, 2005 - The Eve of the Anniversary of the Discovery of the Head of John the Baptist


Understanding How Divine Justice Functions  Is the Key to Understand "the Why" the Future of the U.S.


As the World Institutions come crashing down, specifically  what can an individual do to assist God? Plenty!


Providentially, we are writing this update from a location just a literal stone's throw of Sister Lucia's Carmel Convent. Yes, indeed, she has passed on to her Heavenly reward. It is not another Vatican "bait-and-switch" story.

If you wish to honor her and console her posthumously for the suffering she endured seeing how the Church Administration trampled on the opportunity God gave mankind through her and her cousins Francisco and Jacinta, we suggest the following:

(a) Re acquaint yourself with the Chronology of the events;
(b) Read from her own handwriting (with the official English translations) the key parts of the Messages Heaven delivered through them for the benefit of mankind;
(c) Familiarized yourself with the real Third Part of the Message, as revealed through the actions of responsible Church Administrators;
(d) The proof of what was revealed as the Third Part of the Secret, using H.H. John Paul II as a prop, is an outright lie;
(e) Understand how a key portion of the Fátima Message works - and then - practice it!
(f) Avoid spending time in trying to "read the tea leaves" regarding the meaning of why she died now; why she died on the 13th; etc., etc. The greatest honor anyone can bestow on a messenger from Heaven is to act upon the message. The rest is just empty talk, just like Church Administrators did back then.


The Remaining Old Testament Prophecies  Will Soon Be Finally Fulfilled. But do not take our word for it...
It is so obvious... to those who Eyes to See and Ears to Hear.


What to expect  Beyond H.H. John Paul II?  The Hierarchy worldwide was advised of this Eleven Years ago!


This type of action is what Our Lord Jesus Christ meant when He said: -  Love your enemies, and pray for those who persecute you.   [Matthew 5: 44] - We stand by this plea just as we did nine years ago. Even though they continue to uphold the invalid You shall love your neighbor and hate your enemy. [Matthew 5:43]


Ecclesiastical Secret Societies -  Who are they? How to detect them?   - Obviously the British government is having difficulty with this now.


With "Black Thursday" behind us, we are dusting off our -  We Told You So Documents


Today we are starting a new program -  Points to Ponder About   Very brief thoughts that will assist the faithful in their spiritual journey as well as an aid in strengthening their faith.


The Importance of the Virgin Mary and the Infinite Power Available to Her.  She IS Far More Than "Just a Pretty Face"  and it behooves mankind to pay attention to Her.


Do not lose faith and become discouraged if you are worried about any doomsday prophecy date coming due? Don't!


Although we have been moved to copious intercessions on behalf of those departed and remaining victims of the devastating Earthquake in South East Asia, the magnitude of the tragedy, 150,000 plus deaths, do not impress us as much as the deaths related to the establishment of Sovietization in Russia and World War II. The deaths resulting from such man made, and totally preventable, tragedy was 1,000 times that of what South East Asia has just experienced.

The earthquake and ensuing tidal waves could not be prevented; however, the Sovietization in Russia, its world wide consequences and World War II were preventable and the Administration of the Roman Catholic Church opted NOT to do so.

As if that abomination was not enough, the Vatican tried to cover up its tracks with an outright lie as they re-created the third part of the Secret of Fátima.

For those of you who have fallen prey to the "Denial" syndrome - that is, to deny the sad reality the world is in - we have prepared a new document wherein we address the  Consequences of the Sin of Denial ; consequences that may only be surpassed in seriousness by the sin against the Holy Spirit of God.

Brethren - our only hope is to Appeal to the Mercy of God... before it is too late to do so!


The Judeo Christian Religious Days of Note and Marian Feast Days  for the Year 2005 Have Been Published. There are many interesting "coincidences" for the year 2005


As the New Year begins, we invite you to carefully review the latest updates in our  Public Forum and our News Commentary Section  : We also wish you a Blessed Year in accordance to the Will of God.

As part of the world is literally awash with thousands upon thousands of decomposing corpses due to, what was formerly known  as, "an Act of God", we are about to enter a new year in a most symbolic way - for the first day of the New and Sorrowful Year of 2005 providentially coincides with the first Saturday of the month.

For those of you who have fallen prey to the "Denial" syndrome - that is, to deny the sad reality the world is in - we have prepared a new document wherein we address the  Consequences of the Sin of Denial ; consequences that may only be surpassed in seriousness by the sin against the Holy Spirit of God.

The number of  Christmas Day 2004-2005 Earthquakes continue to increase and God Wills that I remind one and all that the area most affected by the greatest earthquake on earth of the last 40 years (8.9 Richter)  took place in the focal point of Sex Tourism in which the young ones are prostituted for the deviant pleasure of the "tourists".

We repeat: The power  to diminish the need for God to exercise His last ditch effort to bring souls back to Him and Eternal Life still is in our hands.

Another reminder....  Appearances Are Deceiving : Just as the Japanese Diplomats were in negotiations with FDR's government in Washington, D.C., their air and sea armada was approaching Pearl Harbor.

Now that Bishop Wilton Gregory has been rewarded by The Vatican for his loyalty to them - not God - and has been made Archbishop in the Archdiocese of Atlanta,  we invite the faithful to review  our communication to him on October 2002.


Posted On: December 12, 2004 - Feast of Our Lady of Guadalupe - Patroness of the Americas

Why did the Blue Army of Fátima - the most effective and official Ministry ever established to disseminate and act upon  the Messages of God to His Children and which were delivered by  His Mother , essentially ceased to effectively exist as a true Evangelization force?


Posted On: December 7 - 8, 2004 - Memorial of Pearl Harbor and Feast of the Immaculate Conception

Appearances Are Deceiving : Just as the Japanese Diplomats were in negotiations with FDR's government in Washington, D.C., their air and sea armada was approaching Pearl Harbor.


Likewise, while many of the faithful think that they are "doing the right thing" (while ignoring every possible warning from the Immaculate One) they are willingly playing into satan's hands.

The Illuminati - Fact or Fiction?  - It should now be easy for you to decide unless you opt for the favorite past time of  These Times : Denial

A Road Map To Perfection : It Is Easy To Follow... ...If We Allow God To Help Us


Posted On: November 21, 2004 - Feast of Christ the King and Memorial of Mary's Presentation

Why should Catholics make such fuss over the Feast of Christ the King when  they blatantly ignore His Mother's urgent requests?

Why should the Church honor a King Whose Mother is ignored?

Why should we observe with hypocritical attentiveness the Memorial of Mary's Presentation when Her very urgent, approved by Rome and well documented call  is ignored?

Why should God have Mercy on the Church He founded when its Administrators clearly allow the deceit of His children?

Why should the unprepared virgins, [Matthew 25: 1-12]  who were caught without an adequate supply of oil, should be cast out unrecognized by the Lord? For the same reason ones the other fools, [Matthew 25: 8] cited above, will.

A Testimonial of the  Living Fulfillment of Our Charge. If we had tried, we could not have expressed it better.

The  State of the Roman Catholic Faith - A Current Report.

To better understand our explanation for the results of the U.S. Presidential Election, we must understand  Time and Eternity.

Who was the true victor in the U.S. Presidential Elections? Good or Evil? Of course - it all depends who one asks the question.  This very valid question has been fully addressed, yet not fully answered, in the November 6th posting of our  News Commentary Section.

Why does miguel de Portugal speaks with self-certainty and seemingly without lack of fear of being wrong? This valid question has been addressed if full in the November 3rd posting of our  Public Forum.

© Copyright 2004 - 2015 by The M+G+R Foundation. All rights reserved. However, you may freely reproduce and distribute this document as long as: (1) Appropriate credit is given as to its source; (2) No changes are made in the text without prior written consent; and (3) No charge is made for it.


PAGE of INTRODUCTION to DOMAIN