What about Pregnancy Interruption?

It is never, ever, too late - Even after the fact! 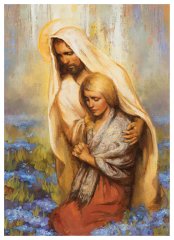 Without wallowing into recriminations and drowning ourselves in statistics let us look at how the interruption of a pregnancy impacts us individually and our society as a whole, and how, empowered by the Infinite Mercy of God, we may start anew no matter what our past transgressions may have been.

Understanding the Impact of the Act

We must first understand the impact upon society before we can access the way to peace of mind and soul. [The following line of reasoning is based on our belief of a Supreme Being, A Creator - God.]


1. If there is a pregnancy it is because God allowed it, thus, there is a human being "en route".


2. This human being, upon full development, will have a real impact on society; otherwise God would not have created him or her. [He may be a baker, a brilliant politician, an ordinary man, a murderer, a brilliant physician, etc.]

What if that individual was to be a great researcher who would find a way to end cancer (which is better than a cure to cancer); Alzheimer's; or Parkinson's; etc.? Even murder someone who was going to cause the world in general, or you in particular, much suffering. [God will use the sin committed by one of us for the benefit of another - nothing is wasted in Creation, yet, we are all accountable for our sins before God just as Judas was.]

What if she was going to be the greatest world leader mankind had ever seen or that unobtrusive next door neighbor who was destined to be, one day, the one who prevented the suicide of her despairing neighbor?

What would have happened if the birth of Abraham had been aborted? Moses? Einstein? Alexander Graham Bell? Noah? Theodore Roosevelt? John Bosco? (1) Mohammed? (2) John F. Kennedy? Princess Diana? Mother Teresa? You? Yes, you!

What would have happened if Jesus' birth had been prevented? After all, to the eyes of the world Mary became pregnant before she was yet married - a woman who, according to their socio-religious law, would have been taken to the edge of town and stoned to death.

Could it be that by ignoring the consequences of our actions we are really playing Russian Roulette but with five out of six chambers loaded?


A Doorway to the Future - Starting Anew

If we honestly face reality, it is obvious that the condition of the world, politically and socially, is deteriorating year after year. Even those who are becoming more affluent are leading more frightened and lonely lives because they are drifting further away from God and slipping deeper into the well of despair.

If people were leading full, rich and rewarding lives they would not be trying to escape their emptiness through material possessions and the temporal pleasures of the flesh (or the elusive dream of enjoying them).

However, the situation is not really that bad... we should not feel that lonely because God loves us and He wants us to be happy and fulfilled no matter what our past transgressions may have been.

He wants to remind us that the worst sin than man may have ever committed is but a grain of sand when compared to the Oceans of His Mercy!  (3)


"Mercy is what please me, not sacrifice! And indeed I came to call not the upright, but sinners." [Matthew 9:13]

...and then, after being well rested and reconciled with Him, you can be all that He intended you to be in this world. You can lead a full and rewarding life and then... spend an Eternity of indescribable joy in Heaven. Really!

(2) Dispelling some gross misconceptions about Islam

© Copyright 1999 - 2022 by The M+G+R Foundation. All rights reserved. However, you may freely reproduce and distribute this document as long as: (1) Appropriate credit is given as to its source; (2) No changes are made in the text without prior written consent; and (3) No charge is made for it.