Some Catholic Groups Are Catching On About

The Motives Behind Francis' Harmful-to-the-Faith Behavior 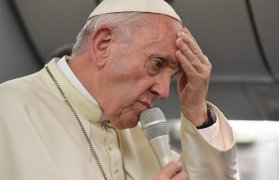 PURPOSE  by The M+G+R Foundation

The purpose of issuing this Guest Article is to illustrate that some traditional Roman Catholic groups are beginning to discern what was behind the election of Francis. However, they still cannot connect the dots because the picture that will emerge - that we are at the End of These Times - cannot be endured by most.


INTRODUCTION by The M+G+R Foundation

In this article you will see what we have been announcing for years - that the U.S. is the last stumbling block before reaching satan's dream of a Globalized World, wherein he will be adored.

In the article you will also see one of the Opus Dei angles in their great support of Francis: "....Pope Francis is 'trying to engineer a schism in the Catholic Church...to drive the Catholics out of the post-conciliar church, thereby leaving all the physical assets and cash for the FrancisChurch'".

Of course, the other Opus Dei angle they still cannot face, thus cannot see is: Using the Vatican as the springboard for the manifestation of the False Christ. Their ultimate purpose.

Incidentally - we are not saying that the Opus Dei intelligentsia is really aware of their ultimate purpose. They are being used satan as part of his plan. Of course, it does not matter if they are aware of it or not - the fact is that they are a Master Key to it and are to be dealt with as such for they have been amply warned (1).

Through Canon 212, I (the original author) came across two posts. One is by George Neumayr entitled "The Roots Of Pope Francis' Anti-Americanism". The other is from a blog called The Deus Ex Machina and it's entitled "More Fog Lifting - FrancisPlan Becoming Clearer And Clearer".

They might seem unrelated but I think there is a common theme running through both. Most progressives harbor deep hatred for western culture - that is, culture that largely originated in Europe from its Catholic roots and that spread throughout its various colonies. The United States of America is one of those offshoots. Owing to our constitutional republican form of government, we have certain safeguards that have helped retard the disintegration of our cultural roots as compared to Europe - but we aren't that far behind them. The progressives are literally hell-bent on expunging from society any vestige of belief and obedience to God and His Roman Catholic Church.

Sadly, they see in Pope Francis an ally in the pursuit of their goals. The US, again, remains as an obstacle to their plans. Had Hillary Clinton won the White House last November [2007], their juggernaut could have processed with lightning speed. By God's grace, she lost and now the rate of decline has slowed somewhat. Hence the pot-shots that the pope has been lobbing in President Trump's direction - and towards us who abhor the progressive agenda.

Other recipients of papal pot-shots are faithful Catholics, particularly those of us who sound the alarm about malfeasances coming from the Vatican. In a development...., we have been advised of a hit piece that appeared in Civilta Cattolica, a semi-official publication coming from the Vatican. One of the two authors is Father Antonio Spadaro. In that piece you can see the visceral hatred that Spadaro (and quite possibly the pope) harbor for those of us who shine the light on their shenanigans; Church Militant TV has particularly earned their scorn. Rorate Caeli has the full text (2). I think I'm not alone in opining that we faithful Catholic bloggers can take hit pieces like this as badges of honor.

I'd like to return to the "more fog lifting" piece for a moment. Towards the bottom of the article we read that Pope Francis is "trying to engineer a schism in the Catholic Church... to drive the Catholics out of the post-conciliar church, thereby leaving all the physical assets and cash for the FrancisChurch". This thought has occurred to me before. One must admit that his "gaffes" are becoming too numerous, too blatant for any reasonable and honest person to believe that they are merely innocent blunders. Of course Neumayr cannot say for certain just what is motivating the pope, but no one can honestly gainsay that there is some sort of ulterior motive behind Amoralis Lamentia (3), the way that faithful prelates are being treated, etc.

Do we have the honesty and intestinal fortitude to accept the truth that is literally slapping us in the face?


FINAL COMMENTS by The M+G+R Foundation

On July 13th [2017] this article was published by Restore DC Catholicism (RDCC). RDCC is completely against Opus Dei and are traditionalists in the good and full sense of the term. However, we cannot recommend them because of their position regarding Salvation. They promote that there is no Salvation outside the Roman Catholic Church, which is contrary to one of the fundamentals of Christianity as we have amply showed elsewhere. (4)


(4) There IS Salvation Outside the Roman Catholic Church

© Copyright 2017 - 2022 by The M+G+R Foundation. All rights reserved. However, you may freely reproduce and distribute this document as long as: (1) Appropriate credit is given as to its source; (2) No changes are made in the text without prior written consent; and (3) No charge is made for it.

Francis, the Record of an Anti-Pope