Technology ready for The Falsification of the Second Coming of Christ 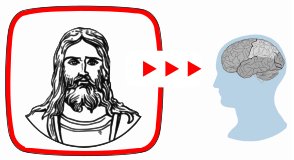 The purpose of Part 2 of this two-part document is to bring our readership up to date regarding the technological advances made in the field of Artificial Intelligence (AI). Such advances will make it very easy to stage the Ultimate Deception —the falsification of the Second Coming of Christ— with the falsification of messages from Jesus and Mary.

In this Part 2, we will cover what Artificial Intelligence (AI) can do to fool the faithful through the composition of false messages by using, as raw material, very little original true text. Natural Intelligence (really, Human Stupidity) has been doing that for centuries by means of plagiarizing texts written by others and combining them into "new" material authored by the intellectual thief.

We have actually seen that done by self-styled visionaries and alleged Divine messengers with material that we have published in The M+G+R Foundation website. They have taken the original material that we have published and, after minor adjustments, present it as Divine messages through them. For us it is easy to spot, since written compositions have something like the author's fingerprint —a style unique to each writer— and we can recognize our own.

Our publications are not the issue in this document – we have used the above just as an example that we know well, in order to set the stage to illustrate our main concern.


OpenAI declines to release research publicly for fear of misuse. The creators of a revolutionary AI system that can write news stories and works of fiction —dubbed "deepfakes for text"— have taken the unusual step of not releasing their research publicly, for fear of potential misuse.

When used to simply generate new text, GPT2 is capable of writing plausible passages that match what it is given in both style and subject. It rarely shows any of the quirks that mark out previous AI systems. (1)

Developers modeled her speech and mannerisms on another Xinhua news anchor, and showed her off in a video recently released. The news anchor created by AI is lifelike, blinking and adjusting her hands as she speaks into the camera. (2)


Do you know the feeling you get when a girl on Instagram looks too perfect to be real? After following her for a while, you want to be with her or be like her. But then, you suddenly find out (yes, you find out, because you could never tell by the photos) that she is not even a person.

Imma's perfect proportions, flawless skin, pastel pink hair, unique kawaii style is all that it takes to attract attention, gain followers and, of course, get plenty of brand deals to advertise. She already has a Twitter account and we can only guess what's coming next. (3)

Imagine feeding to the GPT2 AI program every statement that Jesus made and is recorded in the four Gospels. This would create a very technically accurate "living" Jesus speaking, preaching, teaching and interacting with others.

Now, let us identify the actual face that Jesus has been given and confirmed on a worldwide scale.

In "Heaven is for Real: A Little Boy's Astounding Story of His Trip to Heaven and Back", (4) we are told about a little boy who claims to have interacted with Jesus Himself and who has confirmed what Jesus looks like after seeing a painting (5) of Jesus that Akiane Kramarik drew on inspiration.

That probably has become the most widely accepted visual representation of Jesus' face.

All the deceivers have to do now is have Jesus appearing in YouTube like programs, as well as pod casts, giving the slant to the Gospel that the deceivers want at the time – that is twisting the Gospel in any manner they wish to fit their agenda.

As we all know, in the manner that the Gospels were written all the Jews are shown to be "the bad guys" – when in reality only "the bad guys" were the Masters of the Temple plus their lackeys. However, the AI does not know that and cannot "deduce it" unless told to do so.

With that said, and the evils assigned to all Jews by the manner in which the Gospels were composed, a manipulator can have an AI version of Jesus haranguing all Christians to stage a massive persecution of Jews via a video that was made to go viral. What run of the mill Christians will deny an apparent direct command from "Jesus"? Only those who will know what you now know through our pages.

Let us take another example. All sects —just like Opus Dei (6)— want absolute control of their followers so that first step is to break the links between the family and the new sect recruit. All they have to do is have the AI "Jesus" take to the airwaves and remind all what He had originally said:


"If any man come to me, and hate not his father, and mother, and wife, and children, and brethren, and sisters, yea and his own life also, he cannot be my disciple." [Luke 14:26]


Therefore if any, among his father, and mother, and wife, and children, and brethren, and sisters, block the new sect recruit from following the dictates of the AI "Jesus", they should be ignored or turn them over to the "religious authorities" to be dealt with.

If they need to prove that only the members of their Elite counts, they will have the AI "Jesus" to remind them that the Elite come first and the rest are just like dogs. After all, didn't Jesus say...


For the woman was a Gentile, a Syrophenician born. And she besought him that he would cast forth the devil out of her daughter. Who said to her: Suffer first the children to be filled: for it is not good to take the bread of the children, and cast it to the dogs. [Mark 7:26-27]

How To Identify and Neutralize the AI "Jesus"

Only those who understand the true Biblical teachings which appear in the Gospels —many of which are wrapped in symbolic parables, words and/or phrases— will be able to spot the AI "Jesus" as well as false "Divine" messages fabricated by Natural Intelligence; the rest will not, unless the Holy Spirit of God "sounds the alarm" in their souls.

The only protection that the Elect has is to know what is really taking place regarding the manipulation of the masses while having a true relationship with God; not one based on denial as we have illustrated in the December 6th, 2019, post of our For Your Information and Reference publication (7).

It is obvious that, beyond this notification, and that of Part 1 of this document, the main focus of Miguel de Portugal's (8) efforts through the pages of The M+G+R Foundation must be helping the true children of God in strengthening their faith, thus help them to avoid as much pain as possible.

May God have Mercy on His Elect!


Technology ready for The Falsification of the Second Coming of Christ

(6) Index of Documents Regarding the Opus Dei Sect

(7) December 6th, 2019, post of our For Your Information & Reference publication

(8) Who is Miguel de Portugal

© Copyright 2019 - 2022 by The M+G+R Foundation. All rights reserved. However, you may freely reproduce and distribute this document as long as: (1) Appropriate credit is given as to its source; (2) No changes are made in the text without prior written consent; and (3) No charge is made for it.

The Control of the Media by The World Masters

The Halo Effect: When global evaluations about a person bleed over into judgments about their specific traits

The Face and Name of the False Christ

Back Up Home Page (Mirror Site) || If this is your first visit: Introduction

To search for information: Search Page | Index of Documents