"Jesus of Nazareth, The Infancy Narratives" by Joseph. A Ratzinger 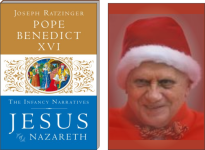 The purpose of this brief review is to make clear our position - revulsion and rejection - regarding Ratzinger's latest blasphemies.

Last December [2013] we acquired and reviewed Ratzinger's latest book: Jesus of Nazareth - The Infancy Narratives (1). Our intent was to write a comprehensive review of this book. However, because events are rapidly advancing, we have decided to just quote a few passages (which, on their own, will allow any reader to judge the rest of the book).

The stage is set in the book's Foreword. On page xi, Ratzinger writes:


I have set out here,... to interpret what Matthew and Luke say about Jesus' infancy at the beginning of their Gospels.


The second question posed by good exegesis must be: is what I read here true?


He intends to "interpret", that is, give the reader a new meaning for the Gospels of Matthew and Luke after sowing the subliminal seed of: "is what I read here true?"


I would add that the late emergence, particularly of the Marian traditions, can be similarly explained by the discretion of the Lord's mother and of those around her: the sacred events of her early life could not be made public while she was still alive.


A position confirmed on page 53, where we read:


It seems natural that after Mary's death could the mystery (the birth of Jesus) be made public and pass into the shared patrimony of early Christianity.


Death and corruption are the consequences of the Original Sin.


16 And the Lord God commanded the man, "You are free to eat from any tree in the garden; 17 but you must not eat from the tree of the knowledge of good and evil, for when you eat from it you will certainly die." [Genesis 2 - NIV]


...therefore, Mary never died as we know death. She went into a deep slumber and was taken up into Heaven while Her Holy body was being Glorified in this process of ascension. The Orthodox Church aptly calls this Mary's Dormition; the Roman Catholic Faith calls this Mary's Assumption.


[In case anyone wonders "why did Jesus die?" - The answer is straight forward: He died because He assumed our sins. However, being the body which had encased the Spirit of God, it was spared corruption through an almost immediate Glorification.]


Of course, such demonic pill - the death of Mary - is easier to swallow after having read on page 45 that:


He (Joseph) took Mary home as his wife, but did not "know" her until she had given birth to the Son.


Therefore, according to the alleged "Pope" and "Giant Theologian", Mary was an adulterer since Mary was already the Spouse of the Holy Spirit of God when She "knew" Joseph. No wonder Ratzinger also claims that She died!

It is absolutely unthinkable that after the intimate union between God and Mary, She could give Herself to a man - any man!

After coming across the above texts it became obvious that our time, which belongs to God, is too precious to waste in preparing a full review of the AntiChrist's latest printed blasphemy.

Maybe we see it that way because we are "simple believers" as Ratzinger calls those who "...to this day they join in their caroling on the Holy Night..."

On page 74 of Ratzinger’s book-length blasphemy, one reads: It is only natural that simple believers would then hear the shepherds singing too, and to this day they join in their caroling on the Holy Night...

© Copyright 2013 - 2022 by The M+G+R Foundation. All rights reserved. However, you may freely reproduce and distribute this document as long as: (1) Appropriate credit is given as to its source; (2) No changes are made in the text without prior written consent; and (3) No charge is made for it.