The False Christ Has Been Identified

It May Now Have a Face and a Name 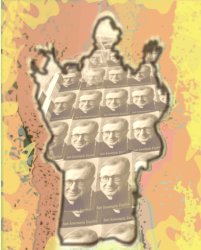 The purpose of this document is to give a face and a name to the False Christ. Outside of this there is nothing else we can do to alert the world at large regarding this matter.

Those who are to believe it, will; those who are not, are not of our concern. Such as it was for our Lord Jesus when He spoke in parables.

To fully understand and comprehend what we are about to reveal to the readers of this document, the following three documents must have been read and understood first.


The Manifestation of the Anti Christ


Who Is Who? in The Apocalypse


Without the information contained in the above documents as background it perhaps may be more difficult to understand what we expose below.

God had revealed to miguel de Portugal all the coherent components of this puzzle, nonetheless, He had not allowed him to recognize how they fitted together revealing the identity and the mechanism to be used for its manifestation until now.

The main key to this mystical puzzle is that the first beast of the Apocalypse represents the False Christ, while the second beast, also known as the false prophet, represent one or more individuals who are recognized, on a worldwide scale, as religious leaders who will lead others to adore the image of the first beast. Notice that the Book of Revelations mostly mentions the adoring of the image and not of the individual/person himself [Rev. 13:14-15; 16:2].

Those who are familiar with our writings about the Opus Dei sect (1) will remember that we have already brought to their attention the following - without necessarily connecting them with each other:


(a) The Opus Dei is behind, and will stage, the manifestation of the False Christ.

(b) Escrivá called the pamphlet he authored, and which is so revered by Opus Deists, "The Way". A blasphemy when we consider that Jesus is known among all Christians as "The Way". The only Way!

(c) The False Christ will be a very well known face.

(d) As soon as Ratzinger assumed the Papacy as Benedict XVI, he blessed on September 14th - the Solemnity of the Triumph of the Cross - a statue of Escrivá which, earlier in 2005, had been installed in the outer wall of St. Peter's Basilica. The warning given by Jesus, as recorded by Matthew on Chapter 24:15-21, regarding this event was and again is: "...see the abomination of desolation, which was spoken of through Daniel the prophet, standing in the holy place". It was then confirmed.

(f) As it is written, the first beast can manipulate the political world leaders (the kings of the earth) - thus becoming a political leader with global reach.

The Opus Dei has achieved this by having their followers penetrate the political, religious and educational fabric of the societies in North, Central and South America, Europe (Western and Eastern) and the Philippines - while to a lesser degree - everywhere else in the world.

At the right time they will rise - as professional agitators do - and lead the masses, within their sphere of influence, to adore the image of the first beast - the False Christ - as the savior of the world. A world which, by then, would be submerged in chaos.... a chaos they themselves staged.

(h) Escrivá's Judaic background was initially exposed in an earlier document that we published and which now is fully confirmed in Chapter III - Cryptojudaism and the Opus Dei - of the book Opus Judei.


Our publications about the Opus Dei sect (1) is a treasure trove of information about them. Information which will help the readers to fully understand them, their agenda, their methods and their long term plans, the last details of which we now reveal in this document.


Josemaría Escrivá de Balaguer is represented in the Book of Revelations (Apocalypse) by the beast no. 1 - which is clearly identified as the False Christ.


How the Opus Dei operators will publicize the identity of the False Christ is not of our concern. Will they stage a "resurrection" of Escrivá?, we do not know and it really does not matter. What matters is that he has been identified.

The beast no. 2 - also known as the false prophet - is a Pope which seems to be best represented by the 'Benedict XVI - Francis' duet, or maybe another one who they may place in the Chair of Peter to prove us wrong.

The world has now been fully warned and miguel de Portugal's responsibility has been fulfilled.

(1) An Index of Documents about the Opus Dei Sect

© Copyright 2018 - 2022 by The M+G+R Foundation. All rights reserved. However, you may freely reproduce and distribute this document as long as: (1) Appropriate credit is given as to its source; (2) No changes are made in the text without prior written consent; and (3) No charge is made for it.