The M+G+R Foundation Just how ignorant are we Americans?

How do we Americans fare on the ignorance index?

To translate this text into any major language Click Here

A recent poll ran by Ipsos MORI (1)(2) studied the level and quality of information and misinformation the citizens of fourteen key industrialized nations exhibited. The poll showed that only the Italians are less informed than the US when it comes to key day to day issues of today's world.

As we have amply explained elsewhere - and confirm on an ongoing basis as we witness the behind the scenes events on the world stage - the U.S. - the nation, its citizens and its leaders - is the last stumbling block for the plans of those who still think that they will be able to establish a New World Order (3).

It logically follows that "We the People" - Americans - have to be moved out of the way. The best technique to do so is to have the population of the U.S. as uninformed and/or misinformed as possible of their surroundings - national and international. An uniformed or misinformed individual constitutes the easiest individual to be manipulated and led to a trap.

Does it make any sense that a nation which is at the cutting edge of technology in all fields seems to be populated by dummies as the Ipsos MORI poll seem to indicate?

However, this poll only confirms in great detail what Jay Leno, of the Tonight Show fame, showed in the periodic segments in his shows which he called "Jaywalking" (4). In here is the catch.

If one feeds misinformation to an individual with high IQ, said individual will draw the wrong conclusions and will act in the manner those who fed him/her the wrong information want him/her to - no matter how high his/her IQ is.

Simple, isn't it? Have you ever stopped to think why the U.S. military, which saved the world twice in the 20th century by being the key contributor to winning World Wars I and II, has not been able to win any of the military conflicts it has been involved in since Word War II?

Something is wrong, isn't it?

Let us just take a look at the results of the Ipsos MORI poll. Keep in mind, the least accurate are at the top. 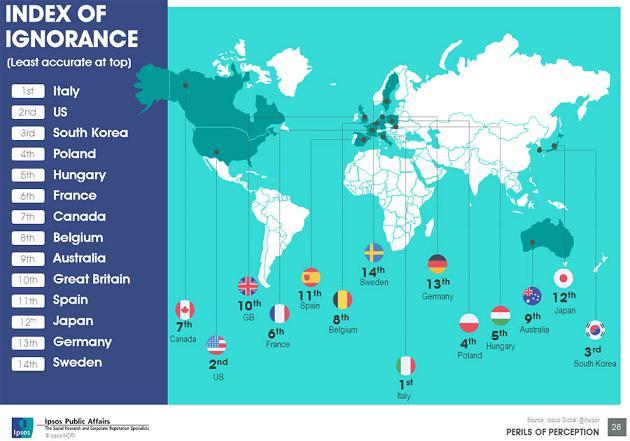 We cannot make the point that we have been trying to make for over twenty years any clearer.

It is up to the reader to act upon the information here presented as God inspires each one to act, which, of course, does not include, under any circumstances, violent behavior.

Text © Copyright 2014 - 2017 by The M+G+R Foundation. All rights reserved. However, you may freely reproduce and distribute this document as long as: (1) Appropriate credit is given as to its source; (2) No changes are made in the text without prior written consent; and (3) No charge is made for it.