The Return to "Christendom": The State and Church Alliance

A False Hope for the Faithful 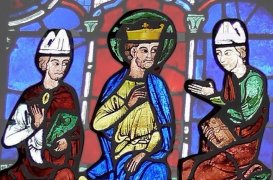 Many Christian conservatives are greatly vexed by the moral decay which worsened during the last century, and they are looking back with nostalgia to "Christendom" - an alliance between State and Church in which the spiritual and temporal powers work together to establish and spread the Faith. Often, traditionalists look toward a future re-establishment of such a "Christian order" as mankind's best hope; they console themselves in the present chaos with the expectation of a "Great King" and a "Holy Pontiff" who will set the world to rights after God punishes his liberal, atheist, secular, decadent enemies. (1)

These hopes for a new "Christendom" are grossly misguided. Force and temporal power are not the way to spread the Faith and draw people to the love of Christ - as Jesus Himself repeatedly showed by word and example.

"Christendom" has been tried before, and it has never worked very well for long. Consider these precedents:

1. Constantine and his successors "Christianized" the Roman Empire after 312.


The barbarians sacked Rome less than 100 years later, and the Western Empire ended in 476.

A present-day historian of the fall of Rome says, "Unsurprisingly, the defeats and disasters of the first half of the fifth century shocked the Roman world. The reaction can be charted most fully in the perplexed response of Christian writers to some obvious and awkward questions. Why had God, so soon after the suppression of the public pagan cults (in 391) unleashed the scourge of the barbarians on a Christian empire, and why did the horrors of invasion afflict the just as harshly as they did the unjust?"

The historian, Bryan Ward-Perkins, notes that there was a large scale "literary response to these difficult questions," and commented on the "ingenious nature of some of the answers that were produced." (2)

During the late 300s and early 400s, the Church went from being persecuted to being a persecutor. "The late empire was a totalitarian state, in some ways an oriental despotism."(3) The Empire used violence against the Donatist heretics, and St. Augustine "became the theorist of persecution; and his defences were later to be those on which all defences of the Inquisition rested. ... He insisted that the use of force in the pursuit of Christian unity, and indeed total religious conformity, was necessary, efficacious, and wholly justified."(4)


2. Byzantium survived the calamity in the West, and expanded under the Emperor Justinian.


However, Byzantium suffered great plagues in the mid-500s, and the rise of the Islamic empire in the 600s and 700s. If the Christian empire had been meeting the physical and spiritual needs of the people, would the Middle East, North Africa, and Spain have fallen to Muslim arms within 100 years after Mohammed died? [One conservative American commentator illustrated the problem several decades ago; he said that Byzantium "was wealthy, and for some it was pleasant, but it was cruel. The oppression of class by class seems to have been bitter and continuous, and its legal punishments were among the most barbarous and inhumane known to history."(5)]


3. Those who romanticize the Middle Ages and traditional Western Christendom say that Christian civilization reached its peak in the 1200s.


In 1907, the Catholic apologist James Walsh hailed the 13th Century as the "greatest of centuries."(6) It was the age of saints and cathedrals, but it was also the age of Crusades (including the sack of Constantinople in 1204, which made the East/West schism permanent, and fatally weakened the Eastern empire, guaranteeing its fall in 1453), Inquisition (founded in 1231 by Pope Gregory IX, and managed by the Dominicans and the Franciscans, the "new ecclesial movements" of the day), and the Imperial Papacy.

The claims of the Papacy reached their apogee in 1302, when Boniface VIII said in his bull Unam Sanctam that the Church is to wield


"...a spiritual and a material sword. But the latter, indeed, must be exercised for the Church, the former by the Church. The former (by the hand) of the priest, the latter by the hand of kings and soldiers, but at the will and sufferance of the priest. For it is necessary that a sword be under a sword and that temporal authority be subject to spiritual power". ... It is necessary that we confess the more clearly that spiritual power precedes any earthly power both in dignity and nobility, as spiritual matters themselves excel the temporal. ... Furthermore, we declare, say, define, and proclaim to every human creature that they by necessity for salvation are entirely subject to the Roman Pontiff."(7)


All of this ecclesiastical power did not prevent the Black Death of 1348-1350 (a plague that killed about 1/3 of Europe and prepared the way for the break-up of the medieval order), nor the Great Schism of 1378-1417 (in which there were multiple "popes" in the Western church), nor the brutal 1527 sacking of Rome and the Vatican by the Emperor of the Holy Roman-German Empire, Charles V, nor the rise of Wycliffe and Hus, spiritual ancestors of the Protestant Reformation.


4. European imperialists had colonized the globe by 1900, and were "Christianizing" the natives in Africa and Asia - an arrangement that World War I began to unravel, and that World War II and its aftermath ended. "Christian Europe" slaughtered itself in the trenches of World War I, leading the poet Thomas Hardy to lament in 1924,


"After two thousand years of mass We've got as far as poison gas."(8)

Constantine's Roman Empire, Byzantium, medieval Christendom, and the imperial Christianity of the pre-1914 era - all came to a bloody end.

If these ventures had been as pleasing to God as their leaders claimed, God would have prospered and protected these "Christian" empires. Instead, he allowed them to come crashing down in ruin, usually in a century or less..

Others may read these precedents differently: They see in them a tale of the miraculous preservation of the Church amid trials, and despite the relentless attacks of Satan against Christian order. This view, however, assumes that Satan is powerful enough to work his will freely, and that God does not bless and save His people in any way that is discernible in history.

I believe, on the contrary, that as Isaiah taught:


"Behold, the LORD's hand is not shortened, that it cannot save, or his ear dull, that it cannot hear; but your iniquities have made a separation between you and your God, and your sins have hid his face from you so that he does not hear. For your hands are defiled with blood and your fingers with iniquity; your lips have spoken lies, your tongue mutters wickedness. No one enters suit justly, no one goes to law honestly; they rely on empty pleas, they speak lies, they conceive mischief and bring forth iniquity. They hatch adders' eggs, they weave the spider's web; he who eats their eggs dies, and from one which is crushed a viper is hatched. Their webs will not serve as clothing; men will not cover themselves with what they make. Their works are works of iniquity, and deeds of violence are in their hands. Their feet run to evil, and they make haste to shed innocent blood; their thoughts are thoughts of iniquity, desolation and destruction are in their highways. The way of peace they know not, and there is no justice in their paths; they have made their roads crooked, no one who goes in them knows peace." [Is. 59:1-8]


I will venture this prediction: If a global "Christendom" is established (as some Christian conservatives and traditionalists hope), God will bring it down in ruin, and great will be its fall.

The higher we men build our Towers of Babel, and the more trust we put in them, the greater the ensuing calamity for those who make their residence in Babylon and trust in its power.

(5) Richard Weaver, "Forms and Social Cruelty," in Visions of Order: The Cultural Crisis of Our Time, 1995, Intercollegiate Studies Institute, p. 79.

Document Published on leepenn.info on October 13, 2007