Points to Ponder About

PURPOSE (*): The purpose of Points to Ponder About is to stimulate thinking that would draw the disoriented Faithful back to God (**) and away from the hypocritical duplicity  of some religious institutions which are destroying the little faith left on earth .

Do you still wonder.... what will happen after Step No. 17?  Wonder no more. You may read about it im the December 30th posting in the Private Forum.

Have you ever realized that Eve (of Adam and Eve), as the virgin Mary, was conceived without sin?  When Eve was conceived, original sin did not exist in Time yet. It was her who brought it upon mankind.

What would you say to God?

Do you ever wonder.... about what would be the best gift to give your loved ones?

This is best Chrismas Gift ever! 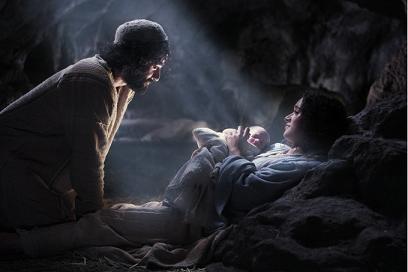 One size fits all and is free!

May you and yours have a Truly Blessed Christmas!

Do you wonder.... why the careful decades long preparation for the manifestation of the fabled Maitreya is being placed at risk? (1)

Do you wonder....  how can Benedict XVI say with authority that the Second Coming of Christ is not upon us and then follow it with: St. Paul had also made clear in his first letter to the Thessalonians that "no-one can know the moment of the Lord's coming (1 Thes. 5:1-2)" ? (1)

If no-one can know, how can anyone say "Not now".

Even if Benedict would claim  that he is Christ on Earth.... he seems to have forgotten that Jesus said: 36 But of that day and hour no one knoweth, not the angels of heaven, but the Father alone.(2) 37 And as in the days of Noah, so shall also the coming of the Son of man be. [Matthew 24]

Of course, he may now even claim to be the Father also!

We are only publishing this just to show to our readers, once more, how ignorant the Vatican think the Faithful are.
_______________________________
(1)  News Report
(2)  We have explained in the past the theology showing that such statement by Paul was true then but not necessarily now. With that theology they could "shoot down" our objection (above), but it is a theology that escapes the "luminaries" of the Vatican. The secret is in the next verse, vs. 37. i.e. Noah had to, sooner or later, know ahead of time so that he could get the Ark loaded and ready to face the flood.... otherwise he would have been caught unprepared.

Do you wonder.... why religious authorities make a greater effort to disprove miracles and Heavenly manifestations than to approach and evaluate them seriously to determine their real intent?

We strongly recommend a thorough review of Chapter 4 of our publication on Marian Apparitions.

Do you wonder.... why there is so much anti-Catholic feelings almost everywhere in the world?

In general terms, we have discussed that in the December 12th Private Forum (2) posting.

In a specific way, Opus Dei scandals (3) as well as those of the Legionnaires of Christ (4) - two organizations who present themselves as examples of pure Catholicism.

Do you wonder.... why if Jesus made crystal clear that we must .... love your enemies: do good to them that hate you: and pray for them that persecute and calumniate you: 45 That you may be the children of your Father who is in heaven, who maketh his sun to rise upon the good, and bad, and raineth upon the just and the unjust. [Matthew 5:44] , those who call themselves Christians refuse to obey that direct injunction?

Christians seem to forget that, He, Who was made Judge of humanity by the Father, will judge us exactly the way we have asked Him to do so: "Forgive us our trespasses as we forgive them that trespass against us,"

How can we be so blind and set that as the measure to be used upon us when, so far, instead of forgiving our own brothers, many are going, with all the haste possible, to murder them in cold blood, for trespasses that, in most cases are but imaginary?

We are not making this up - we are just reminding the world why God allows the horrors which befall humanity.  Didn't He also say....

Give, and it shall be given to you: good measure and pressed down and shaken together and running over shall they give into your bosom. For with the same measure that you shall mete withal, it shall be measured to you again. [Luke 6: 38]


Published on December 5th, 2008  [Devotion of First Friday of the Month]

Have you ever wondered.... exactly how "the coalition" plans to win the war against terror when: (a) The reason for it was, continues to be and will always be, the de facto cultural occupation of the muslim Middle East by the Western World; and (b) Being a militant of said war and sacrificing one's life (a human bomb) is perceived as an honor - spiritual and socially?

Allow us to give you a clue: In Spain there is a Basque Separatist movement that has been active for decades. Their method is: Outright terror. Car bombs, assassinations, back-pack bombs left around, serious vandalism, etc. They want to secede from Spain and be independent. However - they are not interested in martyrdom; they always make sure that they do not hurt themselves.

If one views/listens/reads Spanish news covering this terrorist group and their activities today and, say, seventeen years ago - one will see no difference. One hears all the time the authorities proclaiming: "We have disassembled this or that cell", yet, it seems that in spite of  each "breakthrough" of the authorities nothing has really changed. The "cells" simply multiply - no pun intended.

Now, consider: (a) These terrorists do not martyr themselves; (b) Are homegrown, thus known well within certain areas of the country; and (c) There is no religious zeal driving them.

Now, in view of that, tell us: When will the coalition war on terror end  as long as the core problem remains? Not even when the New International World Order (1) is forced upon the world population. What are they going to be threatened with? Death?

Brethren - Santa Claus is a myth and so is to expect this victory.

The only that will bring peace to this world is justice. Man has amply demonstrated to God that he is not capable of achieving that state even though God sent His Son to deliver a Road Map to construct a just world.

He has taken upon Himself to help us, once and for all, achieve that state in the only way man will understand (2). We are only sorry for the suffering that mankind has caused to God and to Mary - our loving and caring true mother. What about the innocent? Think about it - They will suffer less than if the leaders of mankind are allowed to continue on the same road as they have been. Look at the state of the people in Africa, Haiti, Central and South America, etc., etc.. Compare the level of suffering that they have attained with what they were enduring 200 years ago. Remember the SE Asia  tsunami and why God allowed it. (3)
________________________________
(1)  The establishment of a New International World Order
(2)  The only way man will pay attention
(3) The S.E. Asia Tsunami - Why?

Have you ever wondered.... how is the world and humanity going to look like after Step No. 17 (1)  considering that  Jesus clearly stated - and Mary echoed in recent Apparitions -  "For in those days shall be such tribulations, as were not from the beginning of the creation which God created until now, neither shall be." [Mark 13:19]   ?

Now, if one couples that clearly stated forecast with another very coherent and post-Step No. 17 "State of the World" statement: Blessed are the meek, for they will inherit the earth. [Matthew 5: 5] - What do we get?

Has anyone wondered.... what Malachi Martin meant when he wrote in The Keys of This Blood: Pope John Paul II Versus Russia and the West for Control of the New World Order, [Touchstone, 1990, p. 692]:


Valeska stood up and closed his folder. "Unless I wish to betray my papal oath, I have to take action. I have to say: This is far enough, low enough. At this point, we fight. Hence" - he looked for a long few moments at the folder, then began again - "hence the Papal Plan."

"Here in Rome, there will be six new Congregations, all of them granted an interim existence, each one possessing absolute powers, all of them reporting directly to me. Each one will supervise one area of Church structure that needs drastic and immediate reform: Bishops, Religious Orders, Priests, Ecumenism, Diocesan Organizations, the Mass. Besides being endowed with absolute powers of excommunication, suspension, and interdict, these interim Congregations will have at their disposal three organizations, two already familiar - the Legionnaires of Christ and the Personal Prelature commonly called the Opus Dei - and a third, which has already been established and exists on a worldwide basis but hitherto has remained in total secret."

"These Congregations will supersede any existing Roman Congregation - for instance, the present Congregations for Religious and for Bishops will cease to function until further notice."

"Now, exhaustive lists have been compiled. Let me just read you the main ones. There are, first of all, five important ones: cardinals, bishops, priests, seminary professors, and theologians. Those whose names appear on these lists have a common fate: They will be automatically retired, stripped of any canonical function, and left free to pursue life as they see fit."

As a clue we shall remind you that : Martin had started off in the 1960s, it seems, as a liberal.    He moved to the right in the 1970s and early 1980s, and by 1996 was writing a pro-SSPX novel (Windswept House) which alleged that Satanists in the Vatican had dedicated the Church to Satan in June of 1963.


The Links to the past Points to Ponder About Issues follow:

(*) PURPOSE:  The Purpose of this Page may be found at the beginning of any of the past issues, such as in Points to Ponder (January 2005)

© Copyright 2007 - 2016 by The M+G+R Foundation. All rights reserved. However, you may freely reproduce and distribute this document as long as: (1) Appropriate credit is given as to its source; (2) No changes are made in the text without prior written consent; and (3) No charge is made for it.


PAGE of INTRODUCTION to DOMAIN