An Open Letter from

About The New Atheism 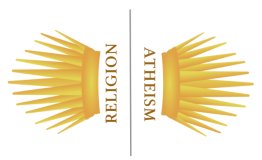 The cover article of the November 2006 issue of WIRED Magazine featured: "THE NEW ATHEISM" - No Heaven. No Hell. Just Science. - Inside - The Crusade Against Religion. (1)

The well written article was authored by the contributing editor of the magazine, Gary Wolf.

Mr. Wolf, although himself quite confused about God, Religion and Science, proved to be a good writer since his presentation was well balanced and informative. For that, I thank him.

For my readers we will first identify those who, according to Mr. Wolf, constitute the core of the "newest religion in town" - The Church of the Non-Believers. I shall refer to them as the "Kardinals" of this new religion.

Sam Harris, Neuroscientist, Founder and Chairman of the Reason Project (2)

It has taken me one week since I read your article, "The New Atheism," until I could write this letter and remain charitable throughout it toward the three atheist Kardinals.

The first item of the article that caught my attention was, and I quote you: "They (the Kardinals) condemn not just belief in God but respect for belief in God. Religion is not only wrong; it's evil."

If I had just landed in my personal UFO, arriving from someplace in the Orion constellation and, knowing nothing about the Earthlings, surveyed the variety of gods that the Earthlings claimed to adore since almost the dawn of time and how religion has been practiced in the same period - I would agree with the Kardinals.

You may not find that strange at all. Indeed, as we read elsewhere in your article, the Kardinals feel that there are many "closeted" atheists in the world who have "no guts" to come out . The difference with me is that I pray and meditate five rosaries every day, offer the Sacrifice of the Holy Mass daily, and offer a variety of other daily prayers and acts of reparation.

That is: If the reality of God and Religion are going to be evaluated by how they have been mostly represented by informal and formal religions, since the dawn of time, the Kardinals' evaluation would indeed be correct. As a matter of fact, if it were not for concern of having my car firebombed, it would sport one of those bumper stickers that reads: Lord, save me from your followers!

What amazes me is that such individuals who, with much fanfare, present themselves as society's "Intelligentsia" and "The Leading Lights of Reason" have not recognized that very obvious fact.

Scientifically "proving" God is as asinine as announcing that we have developed dehydrated water. Please, gentlemen Kardinals of atheism! You should at least try to act the intellectual part that you pretend to play.

You quote Professor Dawkins as saying "I'm quite keen on the politics of persuading people of the virtues of atheism." That sounds to me like a policy statement by the Opus Dei (3). The principle is the same, if one only changes "atheism" to "Josemaría Escriva"; in essence it would be like changing the word "round" to "circular".

But, once again, I find another point of agreement with Professor Dawkins. You quote him as saying:

"Highly intelligent people are mostly atheists. Not a single member of either house of Congress admits to being an atheist. It just doesn't add up. Either they are stupid, or they are lying. And have they got a motive for lying? Of course they've got a motive! Everybody knows that an atheist can't get elected."

No, Professor Dawkins, they are neither stupid nor closeted atheists. They are "believers" indeed - which of course brings us back to one of my original statements: If God and Religion are going to be judged by how they have been mostly represented by informal and formal religions, since the dawn of time, Prof. Dawkins' evaluation of God and Religion would indeed be correct.

You state, Mr. Wolf, that: "Dawkins does not merely disagree with religious myths. He disagrees with tolerating them, with cooperating in their colonization of the brains of innocent tykes."

Because I espouse neither Professor Dawkins' position nor the manner in which God and Religion has been represented throughout millennia, I must take exception to this sophomoric statement. After all, if I were to apply the same "illuminated" logic, I would not want the brains of innocent tykes to be colonized by the incoherent logic of Professor Dawkins and the other Kardinals. Professor Dawkins should realize that, in absolute terms, he is in "the same bag" with those whom he vehemently attacks; there is no difference whatsoever.

The Socialist government has essentially pulled out Religious (that is, Roman Catholic) Education from schools and replaced it with a subject which promotes - under the guise of fostering tolerance - behavior which is not the norm ("norm" statistically speaking). This, of course, is an overcompensation to the past "religious" behavior which Professor Dawkins correctly denounces.

Since I am a firm believer of only criticizing if I can offer a solution, this is what I would do:

Replace the brainwashing "Traditional Religion" classes with a subject which would teach children civil behavior and community living as well as an overview of major religions and beliefs of the world. The parents would, while the children cannot yet make an intelligent decision, raise them in the family faith without any coercion and the clear understanding that as they become better informed, they will be allowed, without any family condemnation, to practice whatever faith they wish to pursue.

Maybe Professor Dawkins would say: "What? Have those little tykes baptized? Have them receive First Communion? Heavens to Betsy!" (no, I guess the Professor would not use that expression...) To which we would respond: "Why worry? If there is no Godm those "empty" rituals will certainly not affect them in any way, would they?"

Atheism and Faith constitute a two way street. If one feels that he has to impose his religious - or lack of it - views on others then one is operating from a position of weakness a la Opus Dei or a la Professor Dawkins. A "good product", well presented through simple example, "will sell itself"; conversely, a "bad product" relies on coercion to "be sold".

Let us now talk about those who - for whatever reason - believe in God and practice a religion without fanaticism. What should The Church of the Non-Believers do about that group? The "Final Solution" - Part II?

Of course not - The solution was given precisely by a scientist centuries ago. I am sure that these "Illuminated Kardinals" of The Church of the Non-Believers have heard about the imaginary numbers used in Mathematics. We are also sure that said luminaries know that those numbers - which do not exist (that is why they are called imaginary) - were developed by Rafael Bombelli in 1572 to resolve mathematical problems which could not be solved with the "real numbers" used in mathematics at the time. (4)

Well, if those individuals need, in order to properly function, to believe in God, practice a religion (without fanaticism), and are constructive members of society - what would the problem be?

In closing... I was somewhat amused when I read that these luminaries pretend to replace God and Religion with Reason. If men (who probably were of far greater stature than the three Kardinals of atheism) tried this in the French Revolution (5) and it failed, what makes the Kardinals think that they will make it work now? Because science has discovered the human genome or has made ingrown toenails a plague of the past?

It does not take the proverbial "rocket scientist" to stand back and look at the French experiment: A tyrannical abusive monarchy was deposed together with its underpinning - the Roman Catholic Church. After a blood bath and a failed attempt to establish the Reign of Reason, France ended up, not with a despotic monarchy.... but with a despotic Emperor - Napoleon, etc.

Humanity's stupidity is only surpassed by its inability to learn from past mistakes - just as the Kardinals have proven if we are to take Mr. Wolf's report at face value.

Regarding Evolution and Creationism - as we have shown (6) - they need each other. Alone neither can stand. Pitting one against the other is just another marketing technique for religious and anti-religious propagandists.

I could go on but perhaps I have made my point - at least for the record since Messrs. Dawkins, Harris and Dennett will not change positions based on anything that I have brought to light. They simply can't. Without maintaining their current controversial position, their "glory" in the eyes of other men would evaporate... and then, what would they have left? A part time job at the local Walmart?

However - I was taught by the "non existing" God to love my enemies and persecutors so... in a "rapture of love" for my neighbors, the three Kardinals, I want to offer them an opportunity that they have never had: a chance to "put their money where their mouths are!"

You are being invited to bring the Administration of the Roman Catholic Church before the International Criminal Tribunal at The Hague for either:


(a) being a key accessory to the greatest genocide known to humanity (ca. 100 million deaths) or

(b) orchestrating the greatest deception ever played upon humanity.


The prosecution can even give the Vatican a choice of which charge to face in the dock of justice.

We understand that the Kardinals do not believe in God but the Church Administrators can be tried within the framework of the beliefs which they promote. I would have brought these charges myself, but do not have the time. Besides, the only glory I need I get from that "non existent" God, and not from the veneration of humans as the Kardinals seem to do.

In these documents (7) you will find the fundamental proofs to start the case.

© Copyright 2008 - 2022 by The M+G+R Foundation. All rights reserved. However, you may freely reproduce and distribute this document as long as: (1) Appropriate credit is given as to its source; (2) No changes are made in the text without prior written consent; and (3) No charge is made for it.