The Attempt to The Rehabilitation of Judas

A Sample of The Press Coverage 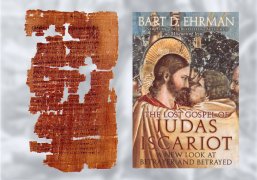 
"By next spring, a Coptic-language Gospel of Judas is scheduled to be published by Rodolphe Kasser of the University of Geneva, in cooperation with the National Geographic Society.

According to The Christian Century, the text has been authenticated as having been written in Greek in the second century AD. No one is saying much about what's in the text, but one scholar who saw part of it said the story appears to justify what Judas did as carrying out God's preordained plan for salvation."


Now, a campaign led by Monsignor Walter Brandmuller, head of the Pontifical Committee for Historical Science, is aimed at persuading believers to look kindly at a man reviled for 2,000 years.

Msgr. Brandmuller told fellow scholars it was time for a “re-reading” of the Judas story. He is supported by Vittorio Messori, a prominent Catholic writer close to both Pope Benedict XVI and the late John Paul II.

Signor Messori said that the rehabilitation of Judas would “resolve the problem of an apparent lack of mercy by Jesus toward one of his closest collaborators”.

He told La Stampa that there was a Christian tradition that held that Judas was forgiven by Jesus and ordered to purify himself with “spiritual exercises” in the desert.


Father Allen Morris, Christian Life and Worship secretary for the Catholic Bishops of England and Wales, said: “If Christ died for all — is it possible that Judas too was redeemed through the Master he betrayed?” The “rehabilitation” of Judas could help the Pope's drive to improve Christian-Jewish relations, which he has made a priority of his pontificate.


The Catholic Apologist Blogger, who had circulated the original news report, claim that there are errors in the story; poor translations; etc. Basically, he withdraws his comments, i.e., "No Campaign", "No Vatican scholar promoting it", etc. [Not to our surprise - we read the original Italian news stories and found no translation errors. Besides, Vottorio Messori does not talk/write without a real reason.]


The Gospel of Judas, the alleged Coptic Egyptian translation of a 2nd century manuscript promises to be a kind of Da Vinci Code--style everything-you-know-is-wrong thrill ride. According to its holders, the text will be unveiled this spring for the first time in at least 1,500 years. If your Coptic is rusty, there will be an official translation, and a National Geographic TV special in late April, they say.


Yet the rumor of its publication has stirred intriguing discussion.

Queried by the newspaper La Stampa, Vatican historian Monsignor Walter Brandmuller noted that the tractate might shed light on early Christianity even if the text had eventually been found heretical.

Vittorio Messori, a layman who has co-written books with Popes John Paul II and Benedict XVI (when he was Joseph Cardinal Ratzinger) is more effusive. "Jesus' words about Judas ["It would have been good for that man if he had not been born"] are tough," he told TIME. But "Judas wasn't guilty. He was necessary. Somebody had to betray Jesus. Judas was the victim of a design bigger than himself."

But when his treatise finally gets its red-carpet moment, the biggest news may be that even orthodoxy's defenders can have some sympathy for the betrayer.

[Highlighting and comments in brackets by The M+G+R Foundation]


Part 1:  The Attempts to Justify The Sin of Judas

Part 2:  Nine Points on The Gospel of Judas

Appendix (this document):  Press About the Rehabilitation of Judas